It’s easy to feel overwhelmed when visiting Paris- there’s so much to see and do that it’s hard to know where to start!

My favourite thing to do in Paris

My top thing to do in Paris is spend time exploring the Palais Garnier, which is the opera house. I haven’t been to a performance yet, but I love the interior of the building. It’s very grand and opulent, and reminds me of Versailles. Have you seen the Palais Garnier? 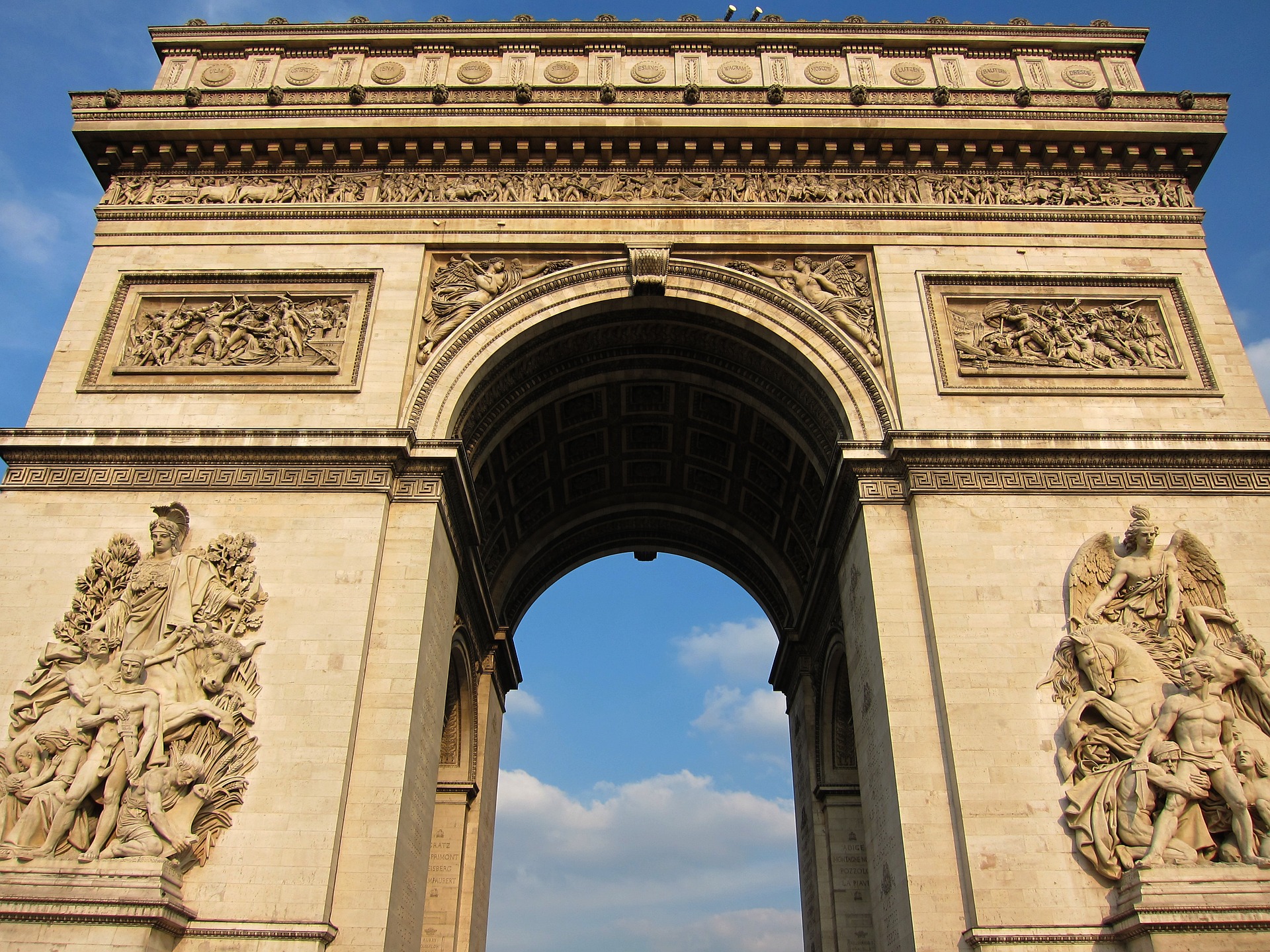 Eiffel Tower- One of the most famous monuments in the world, the Eiffel Tower is worth visiting any time of day but we love it when it’s lit up at night.

Arc de Triomphe- Located on the most famous, and notorious, intersection in the world, the Arc de Triomphe was commissioned by Napoleon and  built to honor the French army. The arc is worth seeing when it’s lit up at night. 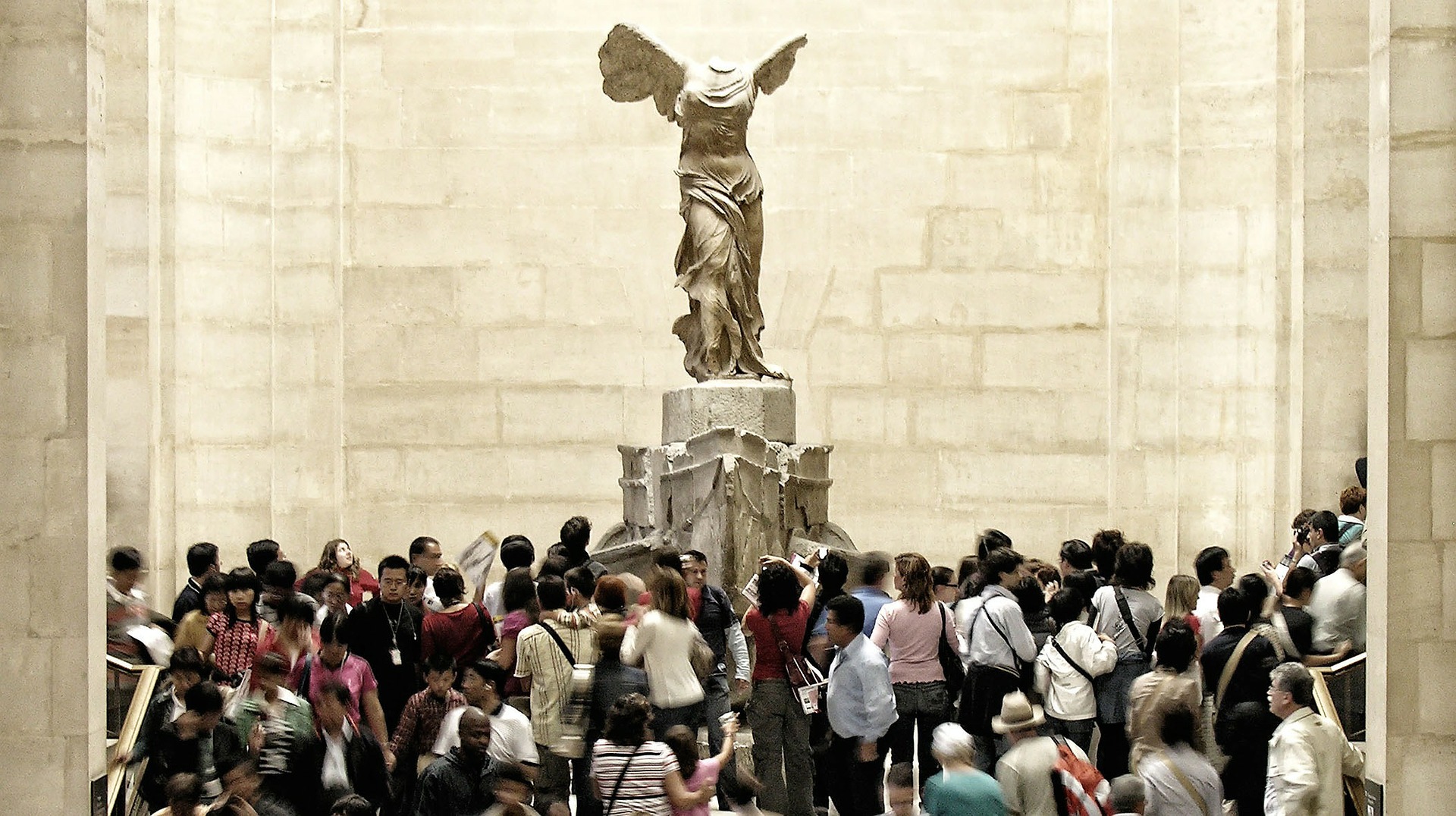 Musee du Louvre- The largest art museum in the world and home of the Mona Lisa, what more can we say about this must-visit Paris attraction?

Musee d’Orsay- Previously a train station converted into a fantastic museum, which is home to a large collection of Impressionist art from the likes of Van Gogh, Picasso and Monet.

Musee Rodin- Home of the largest collection of sculptures by artist Rodin, including the famous “The Thinker”. 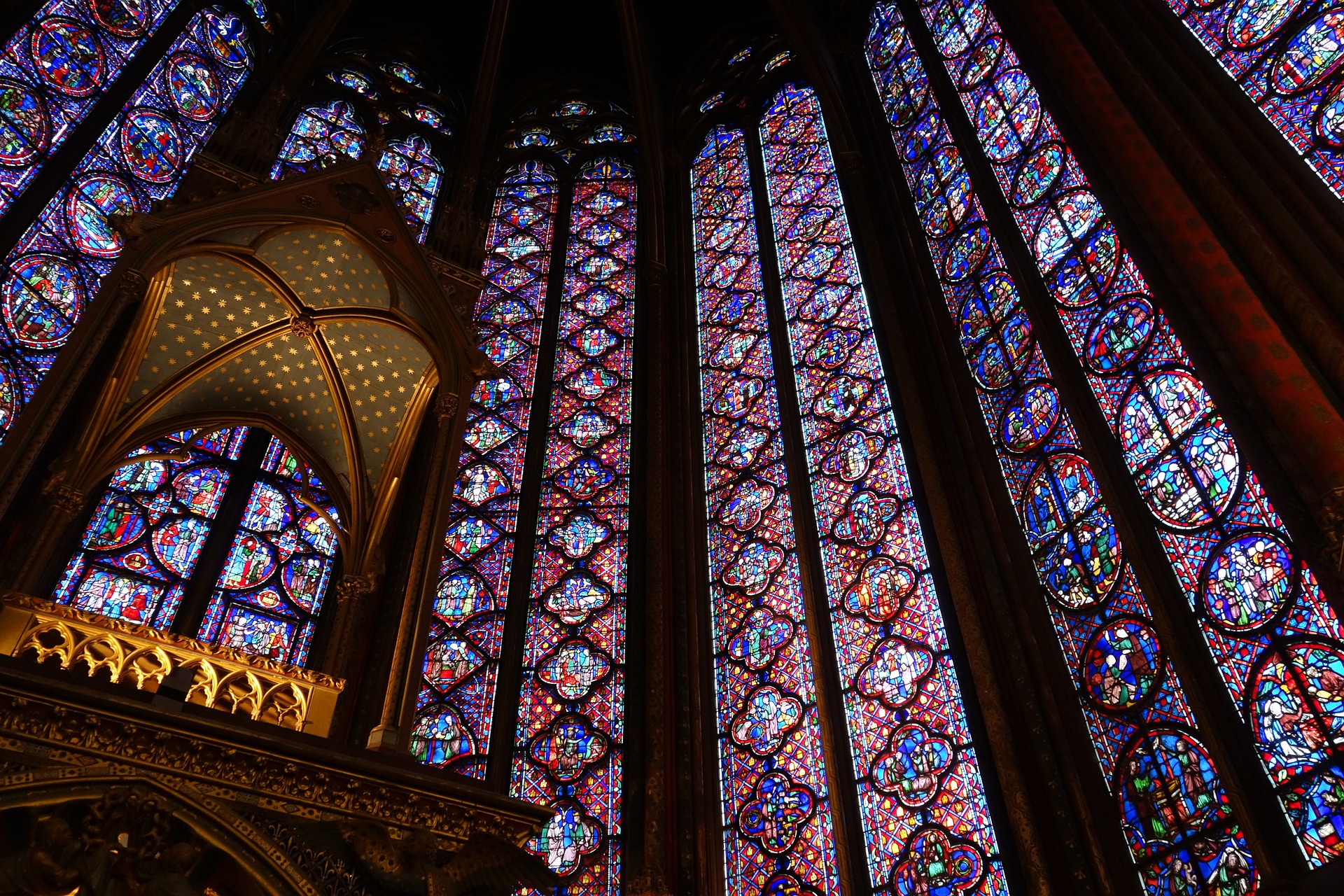 There are many Churches in Paris that should be on your places of worship bucket list, including these:

Notre Dame des Paris- One of the most famous medieval Catholic cathedrals in the world, and is the home of Christs’ Crown of Thorns.

Saint Chapelle- A medieval Catholic Church famous for its brilliant stained glass windows- worth visiting on a sunny day when the light shines through its windows.

Sacre Coeur- Another famous Catholic Church, Sacre Coeur is the second highest viewpoint in Paris, after the Eiffel Tower.

St Sulpice- St Sulpice is the second largest Church in Paris, and is famous for being mentioned in the book The Da Vinci Code.

Luxembourg Gardens- Whether it’s relaxing in the gardens on a Sunday afternoon, playing with the row boats in the pond or letting the kids ride the carousel, there’s something for everyone at these beautiful gardens.

Jardin de Tuileries- Located next door to the Louvre, the Tuileries is a great place to unwind after seeing the Mona Lisa.

Parc de Buttes Chaumont- One of the largest public parks in Paris has rolling hills, cliffs, a waterfall, an observatory and a duck pond. Popular with Paris residents. Batignolle Market- Sells organic produce and is open on Saturdays.

Rue Cler- The most famous market street in Paris, and where locals go for their daily shopping.

Rue Mouffetard- Famous for being mentioned by Hemingway in “A Moveable Feast”, Rue Mouffetard is packed full of food stalls, and tourists. It’s located in the popular fifth quarter. 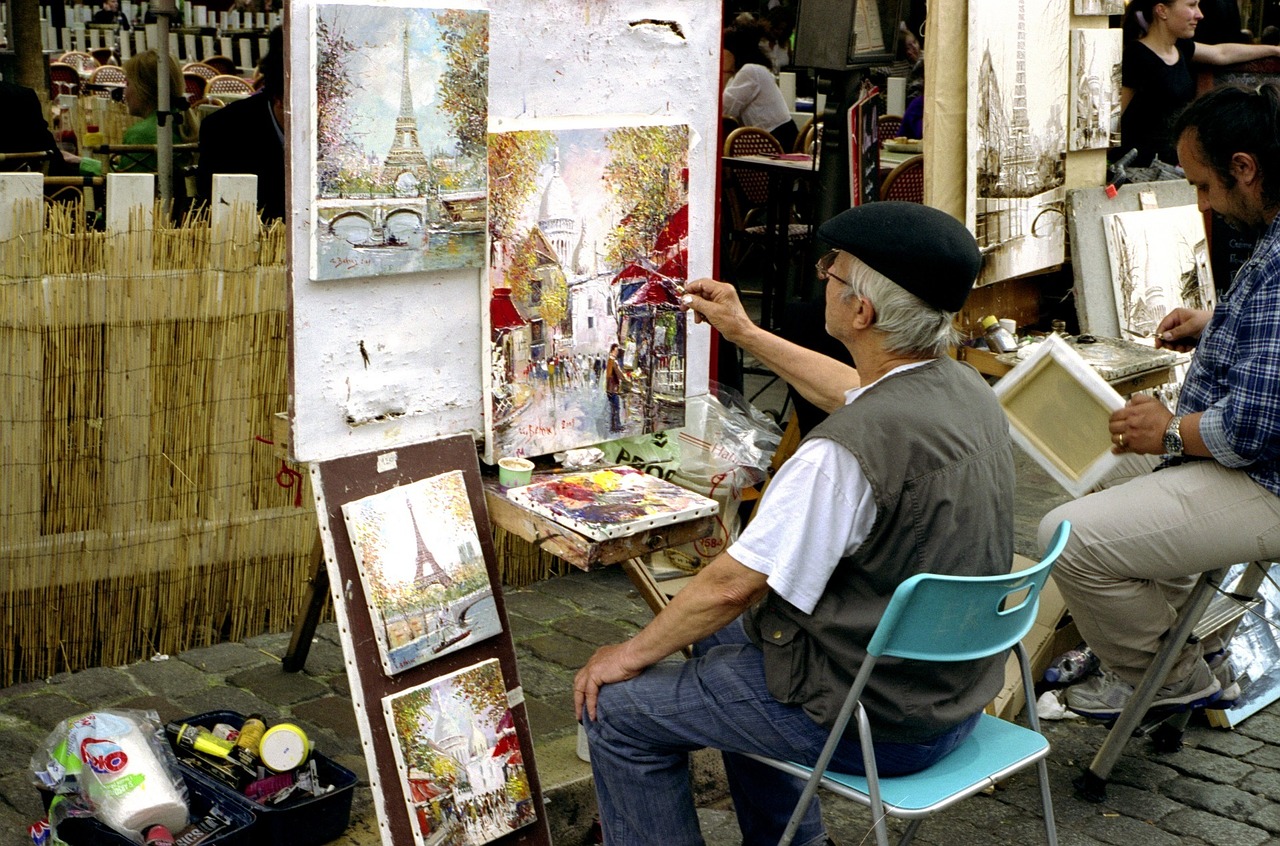 Every neighborhood in Paris has its own personality and charm, but some stand out more than others.

Le Marais- A trendy neighborhood with a vibrant nightlife, restaurants and cafes.

St Germain des Pres- Home to the famous Café Les Deux Magots, which was once the hangout for literaries and intellectuals. St Germain is also where you’ll find high street fashion.

Montmartre- Famous for its artists, Sacre Coeur, and the Moulin Rouge, Montmartre is a popular neighborhood for tourists.

Latin Quarter- A historical neighborhood with winding, narrow streets and cobblestoned roads, the Latin Quarter is popular with students studying at the Sorbonne University. 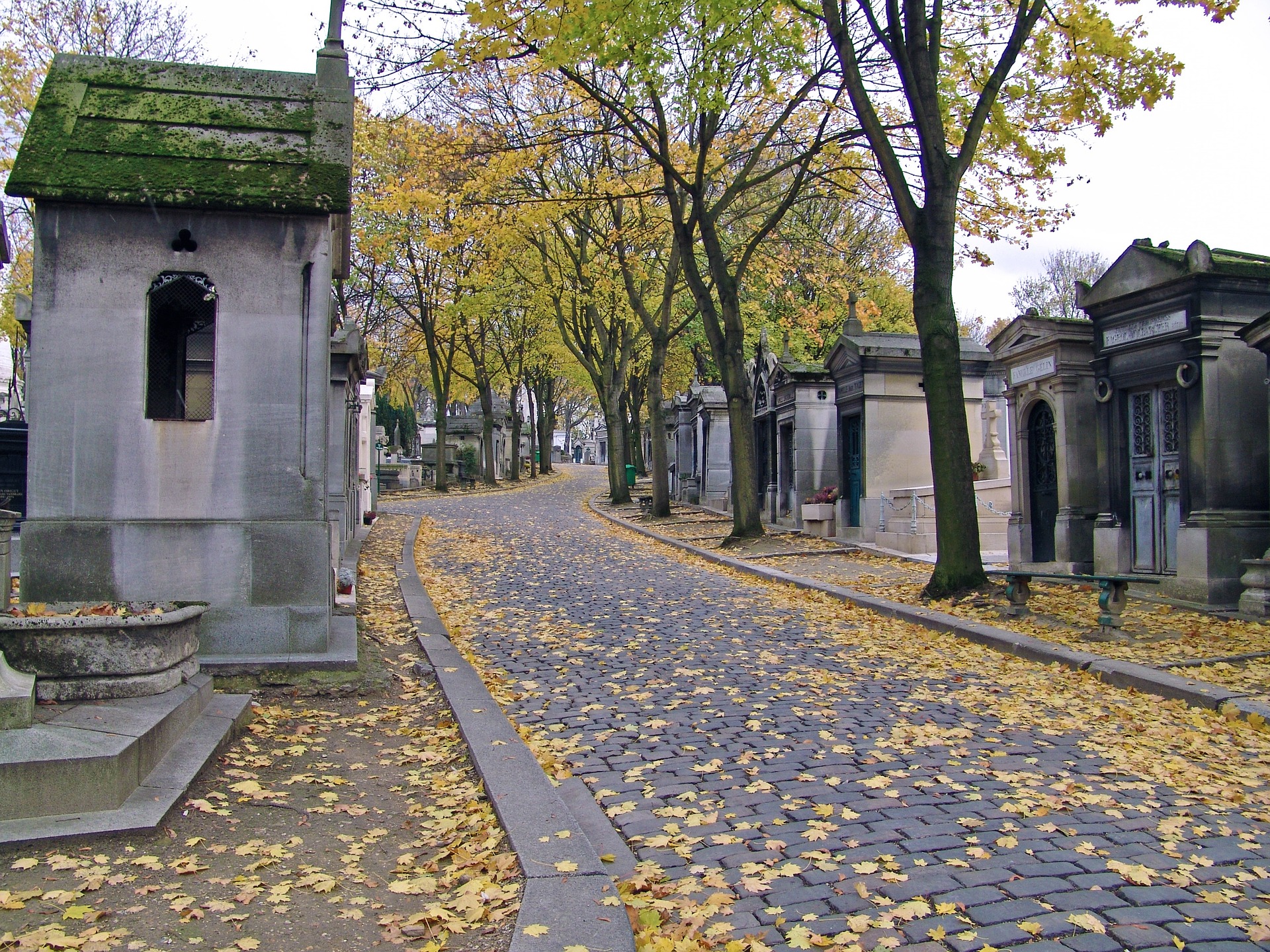 Catacombs- Centuries ago when Paris’ cemeteries were overcrowded, people were buried in the empty underground mines. A section is now opened to the public, and is known as the Catacombs. Not for the faint hearted!

Pere La Chaise cemetery- Famous for being the resting place of The Doors’ Jim Morrison, Oscar Wilde and Edith Piaf. This is a beautiful cemetery to walk around in.

Rollerblading- Every Friday night and Sunday evening, the rollerblading community (including police!) gets together and skates the streets of Paris. 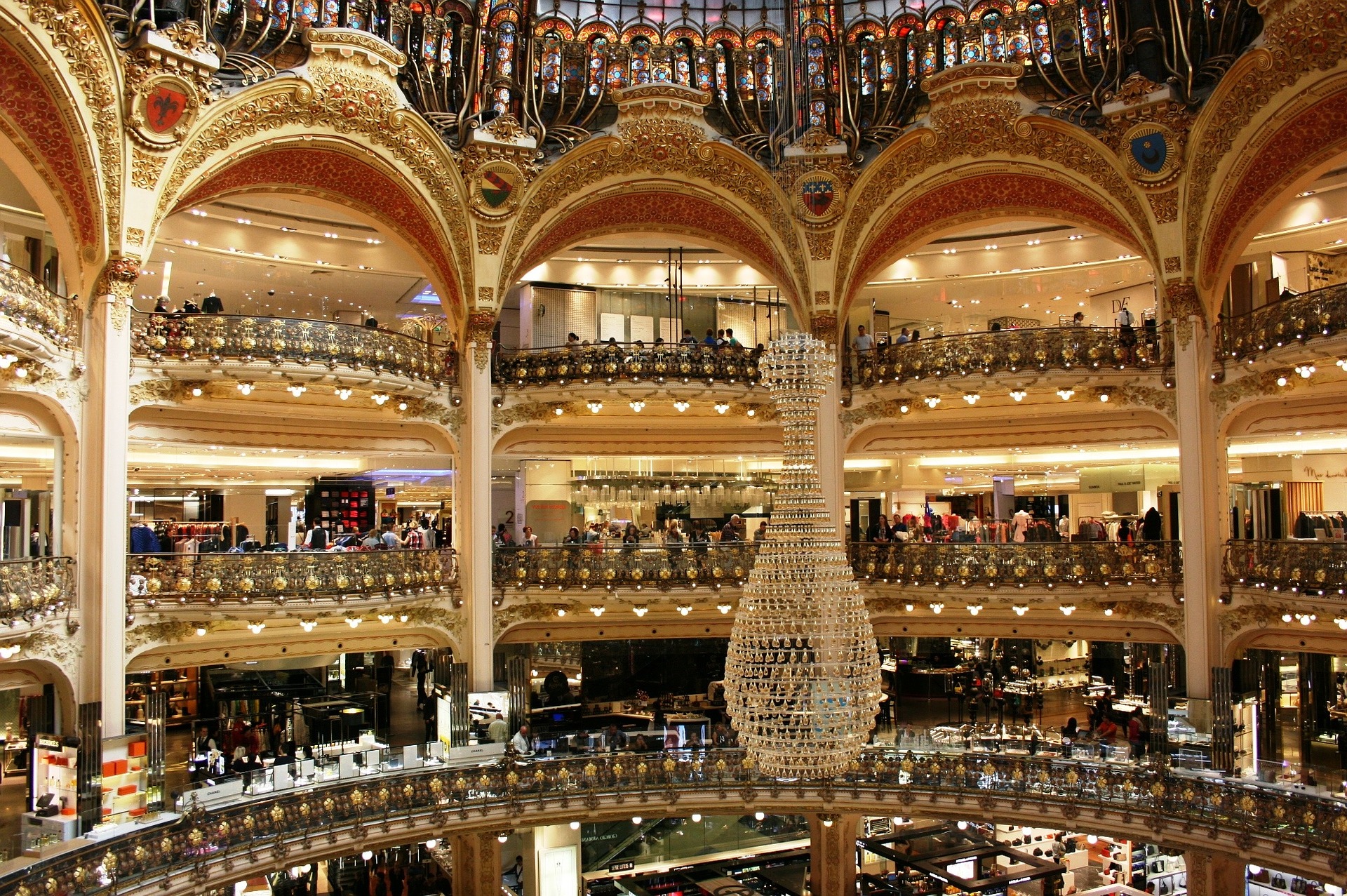 Galeries Lafayette- An upmarket Paris department store located in the  ninth quarter, that’s especially worth a visit at Christmas, when the store is elegantly decorated. Head to the top of the building for excellent views of Paris.

Le Bon Marche- A luxury department store that first opened its doors in 1838.

Printemps- Located on the boulevard famous for its architecture, “Boulevard Haussmann”, Printemps is home to the largest beauty section in any department store in the world, and is also known for selling fashion and homewares.

Shakespeare and Company- Shakespeare and Company is the most famous independent English language bookstore in the world! It’s a very cosy and popular bookstore, selling new and second-hand books and holding various writing workshops and events. Note that the current store is not the original store, which was popular in the 1920s with famous writers such as Hemingway and Joyce, but was built in honour of the original store opened by Sylvia Beach. 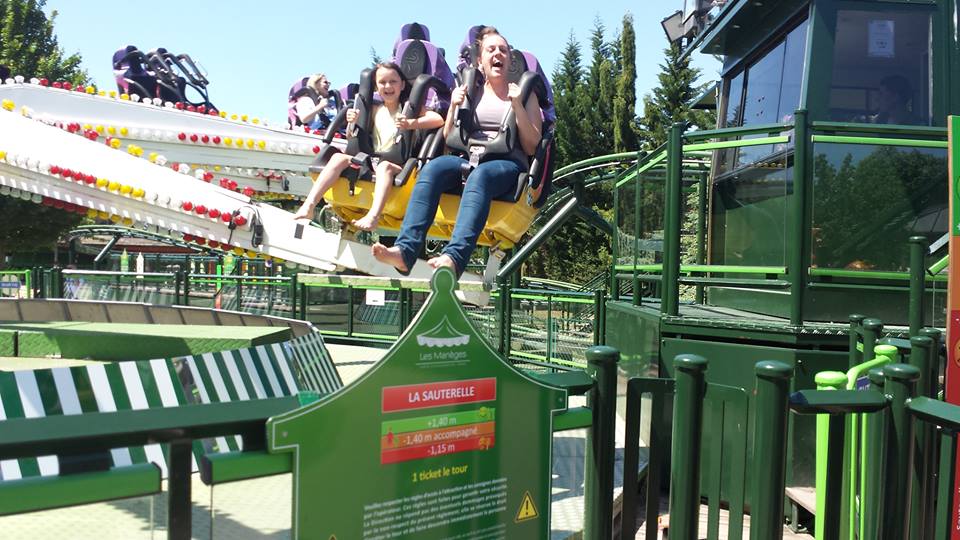 Here are some unique things for kids to do in Paris, but if you want a more detailed list, then check out post on exploring Paris with kids.

Cites des enfants- A fun and interactive science and technology museum created for kids, which features an original submarine. 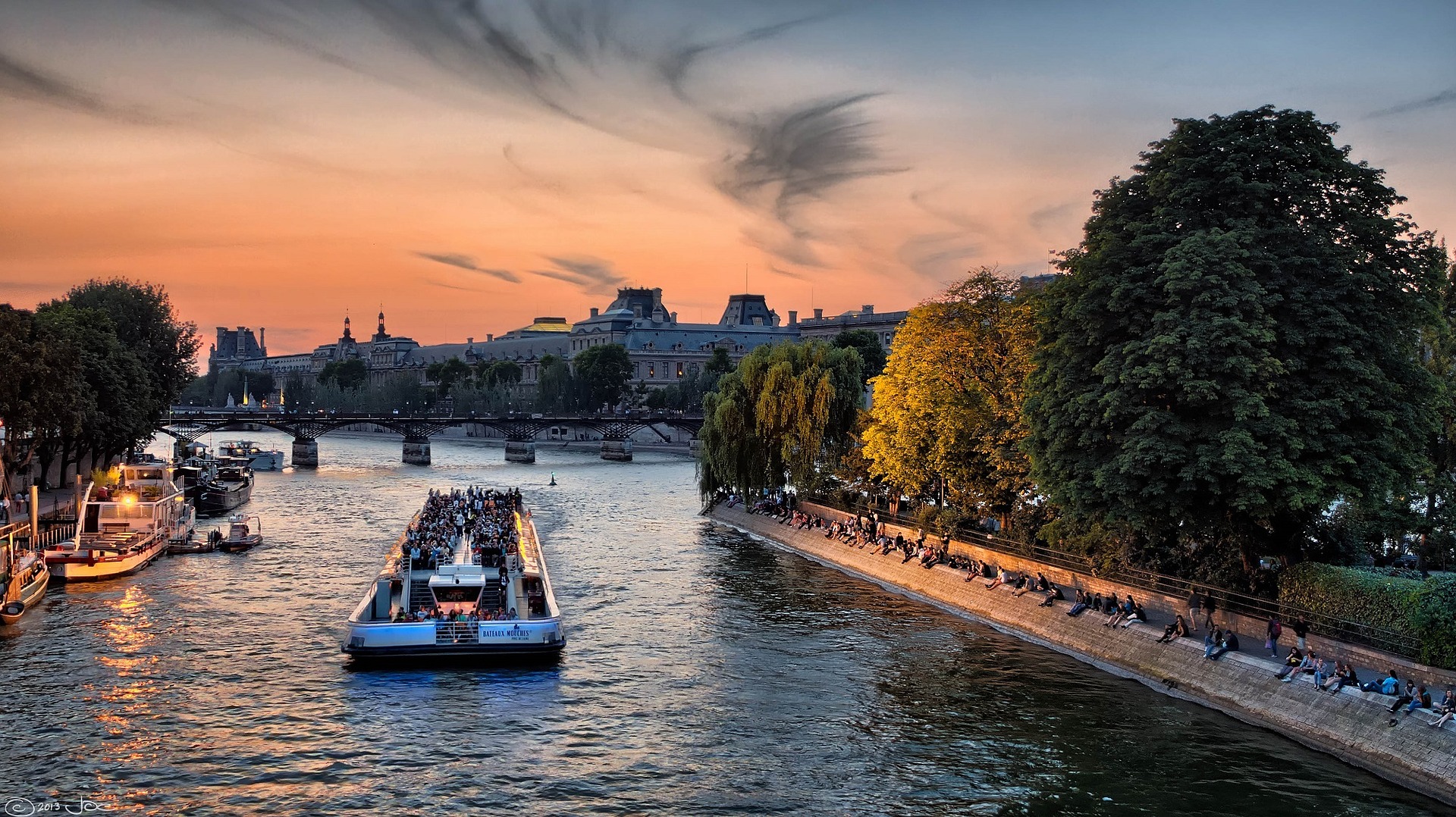 Best views of Paris (other than the Eiffel Tower)

Parc des Buttes-Chaumont- Pack a picnic lunch and head here for great views of the city, without all the tourists.

Le Georges at Centre Pompidou- Head here for wonderful views of the colorful Marais neighborhood and the Notre Dame Cathedral.

Bateaux Mouche- Cruise the river Seine on the Bateaux Mouche for incredible views of the Louvre, Musee d’Orsay and the Eiffel Tower. I recommend doing the last tour of the evening after the sun has set and Paris is in its lit up glory!

Deli-Cieux Café- Located on the ninth floor of the Printemps department store is the Deli-Cieux, which is a self-service café that offers panoramic views of Paris.

Café de Flore- Located on one of the busiest street corners in Paris, Café de Flore has indoor and outdoor tables that makes this café a wonderful (although packed and touristy) place to people watch.

Café de la Paix- A great café located near the Opera Garnier, this is the place to be to watch theatre-goers passing by.

Fouquets- Overpriced and busy, Fouquets is popular for people watching because it’s on Paris’ most famous boulevard- the Champs-Elysees. This is a classier establishment, so make sure you’re dressed the part!

Café Bonaparte- Located around the corner from Les Deux Magots, Café Bonaparte is the place to go if you want a higher chance of getting a table and still want a perfect spot for people watching.

Tennis- The French Open, one of tennis’ grand slam tournaments (also known as Roland Garros), is held every year in May/June and is the largest clay tournament in the world.

Paris Marathon- The Paris International Marathon begins on the Champs Elysees and is held each year in April.

Olympic Games- The summer Olympics will be held in Paris in 2024, which will mark 100 years since the last Olympics were hosted in Paris- 1924. 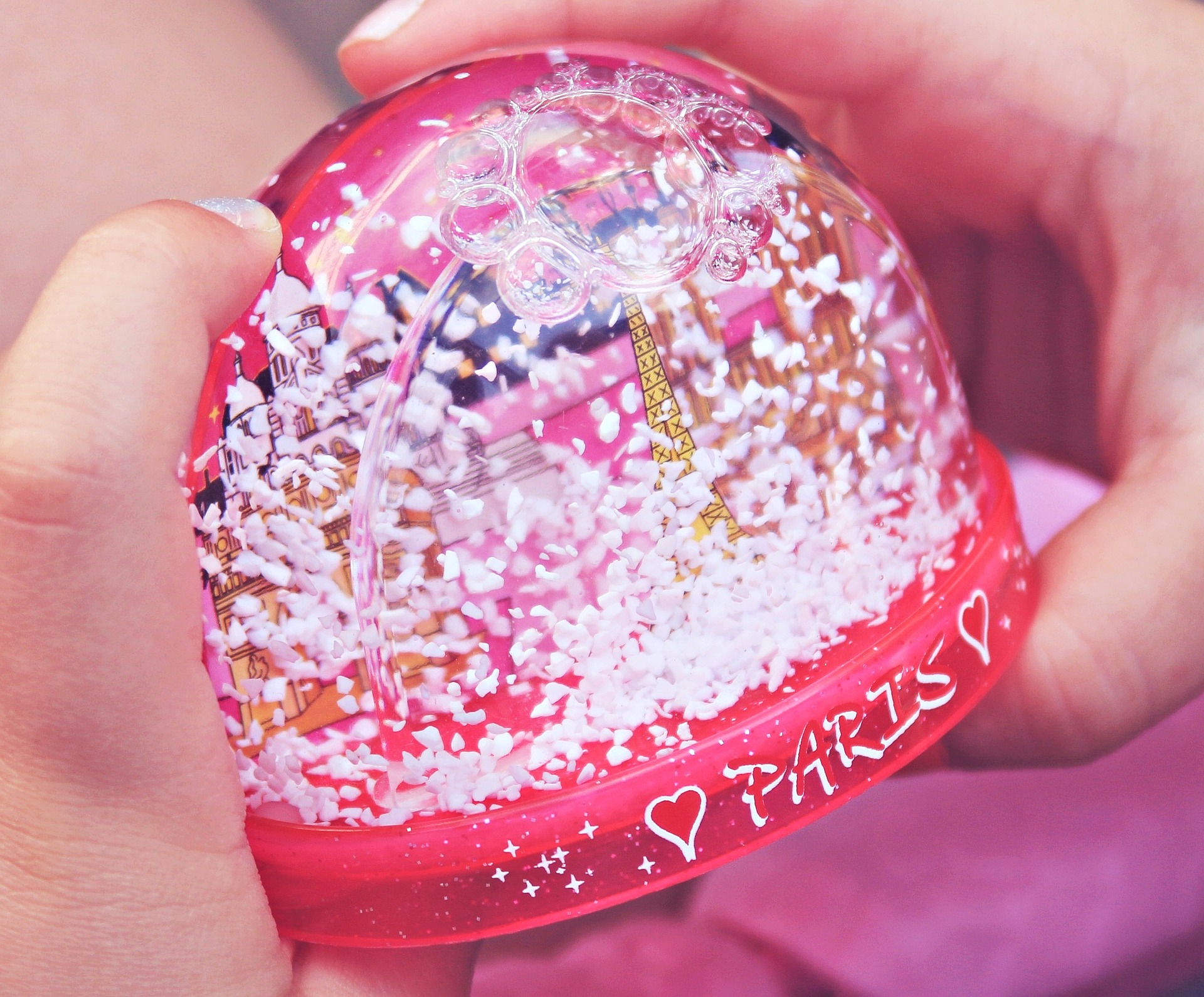 There are many Christmas markets in Paris to visit and enjoy- here are a few!

Alsatian Christmas market- It takes place on the forecourt of the Gare de l’Est train station, and includes treats such as sausages and wine, as well as gorgeous Christmas gifts, storytelling and Christmas theatre. Enjoy the best goods that come from the Alsace region!

Marché de Noël de Paris Notre-Dame- A couple of minutes’ walk from the Notre Dame cathedral, at the Square Rene Viviani, is aChristmas market featuring stalls from 50 artisans from the neighborhood. Shop for handmade gifts and enjoy traditional fare such as macaroons, sausages and foie gras, and finish off with the Christmas staple of roasted chestnuts. 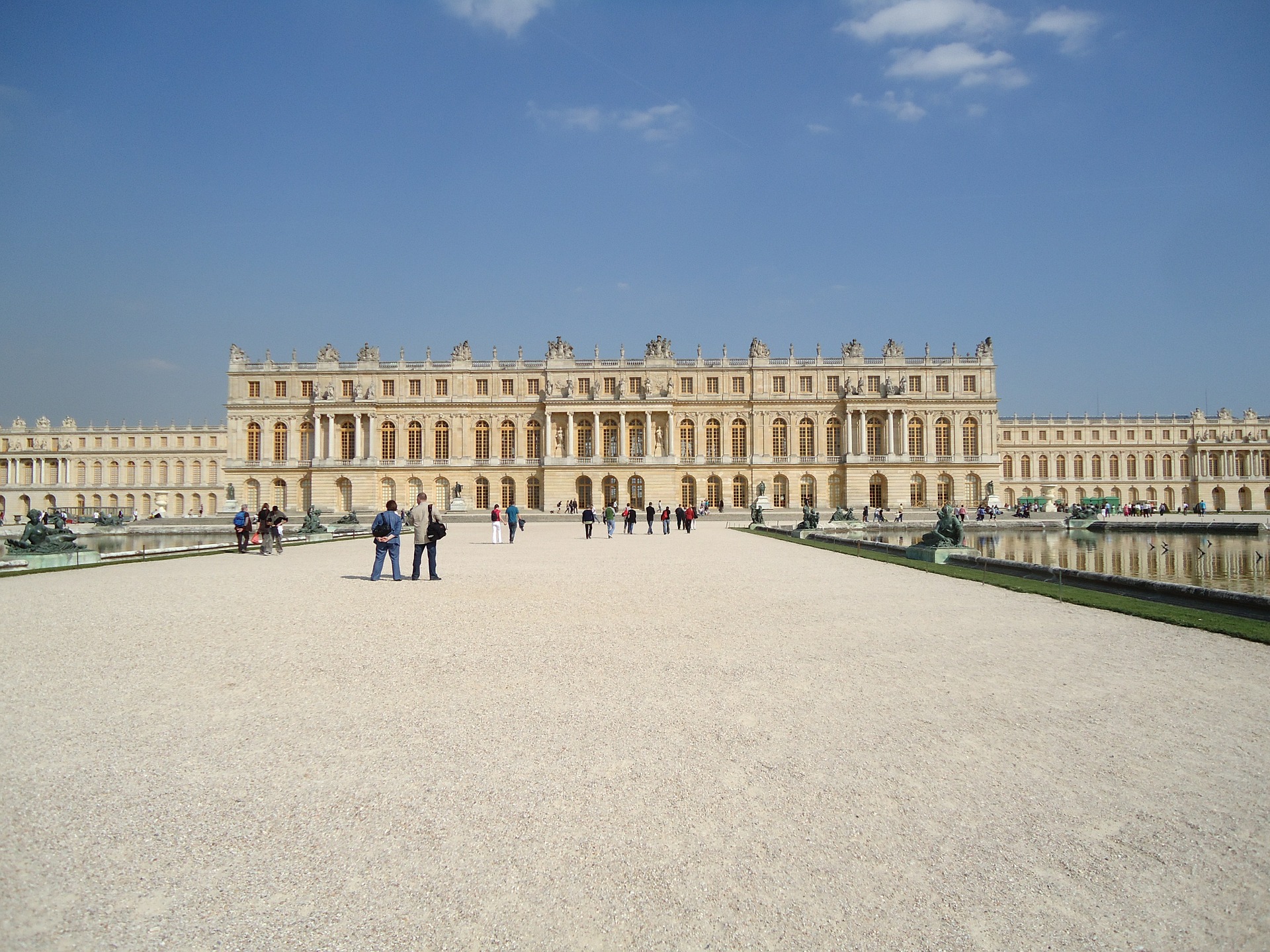 Attractions just outside of Paris

Versailles- Home of the opulent Chateau de Versailles which was once home to Marie Antoinette and King Louis.

Giverny- To the north of Paris is the once-home of painter Claude Monet, whose gardens were depicted in many of his art works. The gardens are open to the public.

Fontainebleau- To the south of Paris is the Chateau de Fontainebleau, a medieval castle that was once home to French royalty including Louis VII and Napolean III.

Disneyland Paris- Yes, there’s a Disneyland in Paris, which was once known as Eurodisney. Not as great as its Anaheim counterpart, but still worth a visit if you’re a Disney fan. And let’s face it, kids love it!

What would you add to this list of the top things to do in Paris? How many of these have you visited or experienced?

3 thoughts on “Best Things To Do In Paris”