Alfred Hitchcock once said that Zadar has the most beautiful sunset in the world, and after our first evening in the Croatian port city of Zadar, I had to agree. 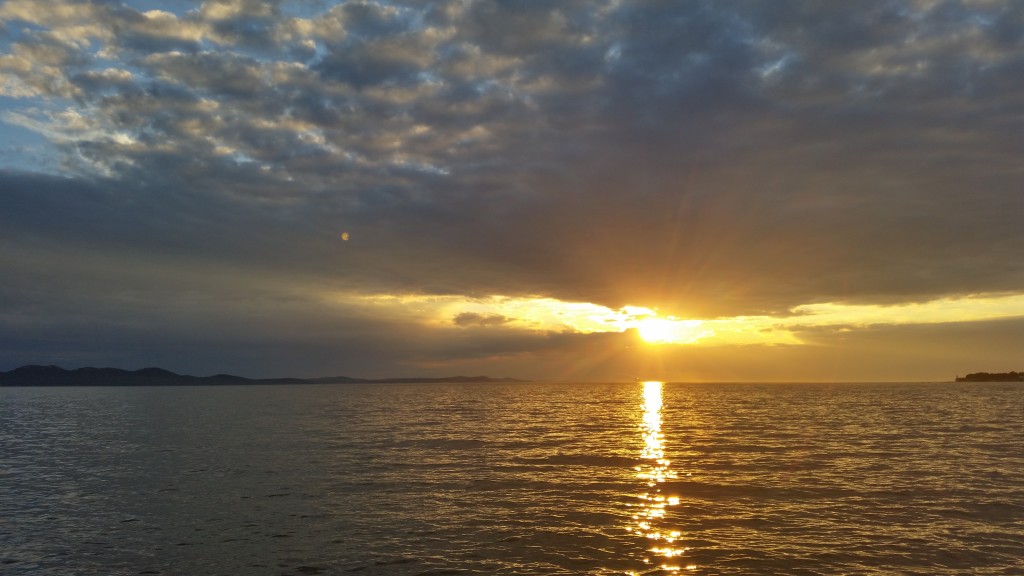 We arrived in Zadar on a Friday afternoon, after a four and a half hour drive south from the sleepy fishing town of Rovinj. Driving into Zadar, I had no idea what to expect as I had never visited despite travelling around Croatia twice before.

Where is Zadar, I hear you ask? Zadar is a port city located on the Adriatic coast of Croatia and is 158km (98 miles) north of Split. It is the 5th largest city in Croatia by population, and has had a turbulent history. According to information on the Zadar Tourist Board’s WEBSITE, Zadar has been ruled by the Venetians, Austrians, French, and Italians until World War II when it was annexed to Croatia.

Zadar was once surrounded by defensive walls that were built during the Middle Ages and also while under Venetian rule, to protect the city from attacks by the Turks. Today, some of the walls still remain as do eight gates into the old town. Our Airbnb apartment was located in the heart of the old town, in an old building across from the St Anastasia Cathedral (Katedrala Sveta Stošije) whose bells we could hear tolling every half hour. We had six flights of stairs to climb which was not fun, with 3 children, 2 suitcases, a bag and 2 backpacks. But we were rewarded with a lovely and cosy apartment that was nicely decorated, with friendly neighbours and in a convenient location.

After dinner we took the kids for our usual ritual of an evening stroll and an ice-cream, and were we surprised by the number of ice-cream sellers in Zadar! Every second food outlet sold ice-cream and due to the intense competition, the displays are extravagantly decorated. 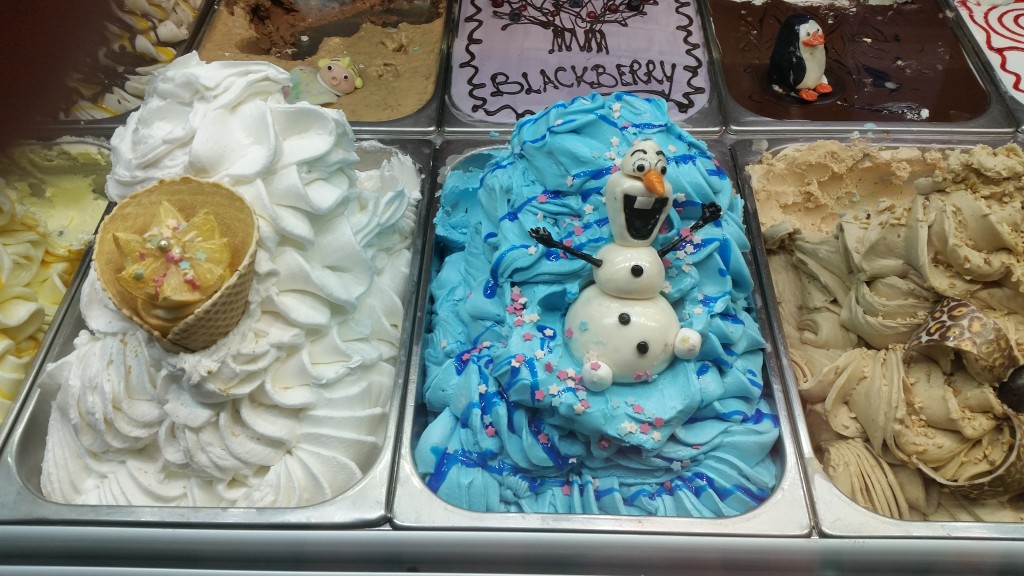 Guess the flavor my kids chose?

Ice-cream in hand, we strolled through the historical old town, passing the Cathedral and the neighbouring Church of St Donatus (Crkva Sveti Donata). St Donatus, originally from Ireland, was a diplomat and was also the Bishop of the Dalmatian region during the first part of the 9th century. His remains were buried in the Church until the 19th century when the French invaded Zadar, at which point they were transferred to St Anastasia’s. Mass has not been held at St Donatus’ Church for over 200 years. St Donatus Church, with the St Anastasia Cathedral tower behind.

We made our way towards the Riva promenade, passing market stalls selling gifts and souvenirs as well as some information about Alfred Hitchcock’s visit to Zadar in 1964. 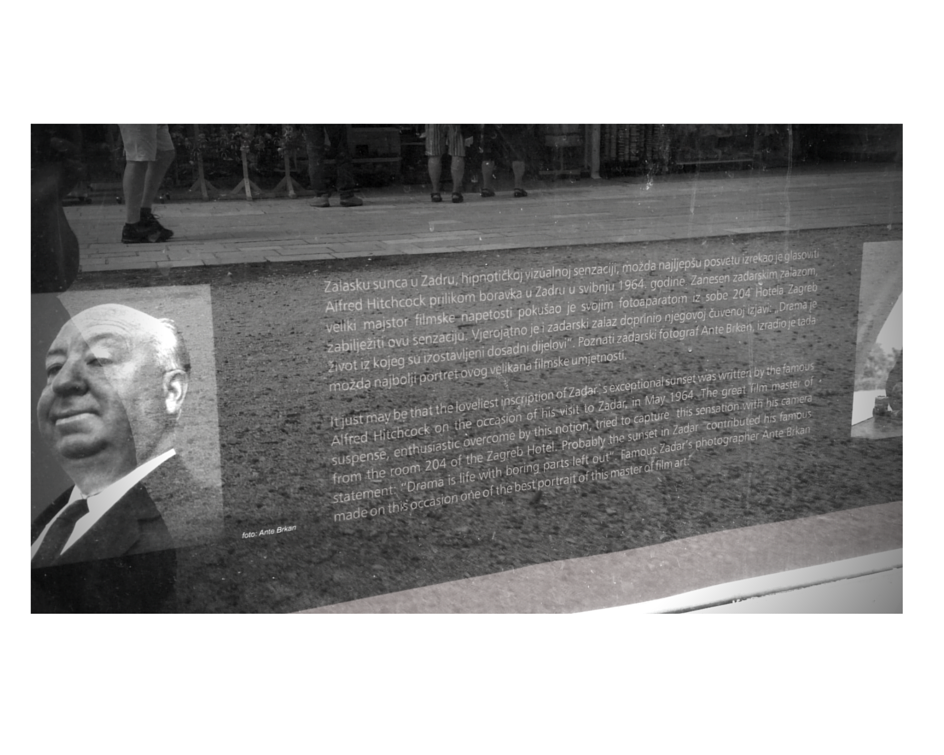 “…in May 1964, the great film master of suspense…tried to capture this sensation with his camera from the room 204 of the Zagreb Hotel. Probably the sunset in Zadar contributed to his famous statement ‘Drama is life with boring parts left out’. Famous Zadar photographer Ante Brkan made on this occasion one of the best portraits of this master of film art.”

The Riva promenade was busy with people enjoying the views of the sunset in the horizon. A few young people were diving off the pier into the clear azure waters of the Adriatic Sea. 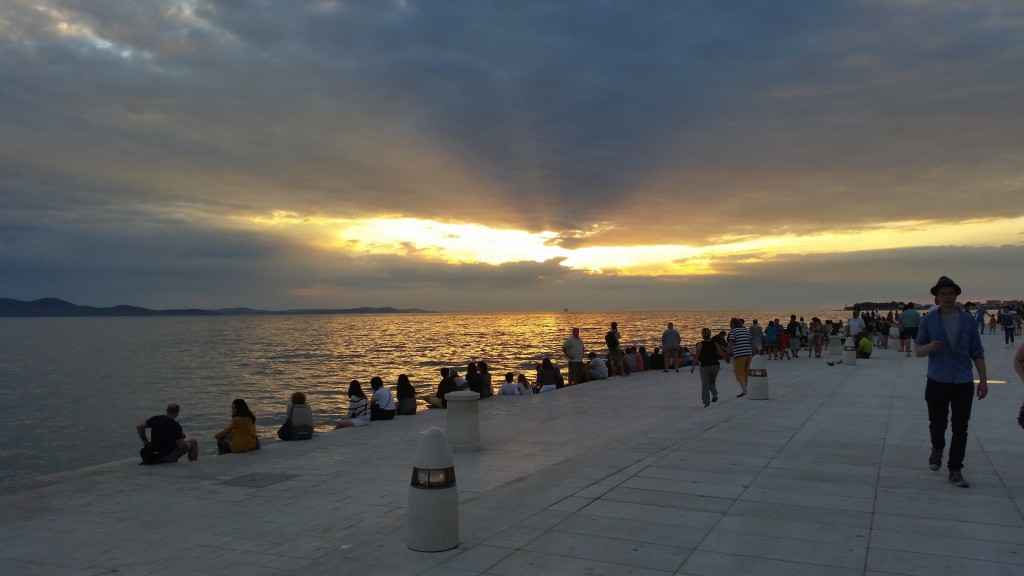 Towards the end of the promenade we came across the famous Sea Organ (Morske Orgulje) designed by Croatian architect Nikola Bašić. The Sea Organ consists of marble steps that have been transformed into an organ via built in pipes. When sea waves (created by ships leaving the port and the changes in tide) crash into the pipes, a soothing organ sound is created. People sit on the steps and relax to the organ sounds, while watching the sun set. 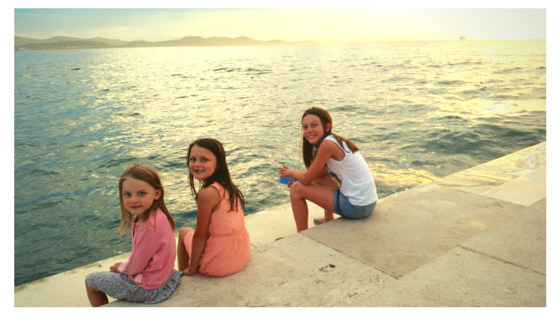 Where the Sea Organ meets the Adriatic Sea

Near the Sea Organ is the Greetings to the Sun, also designed by Nikola Bašić. It consists of panels built into the ground in the shape of a large circle. At night, the solar panels create a light show using electricity it generated during the day. 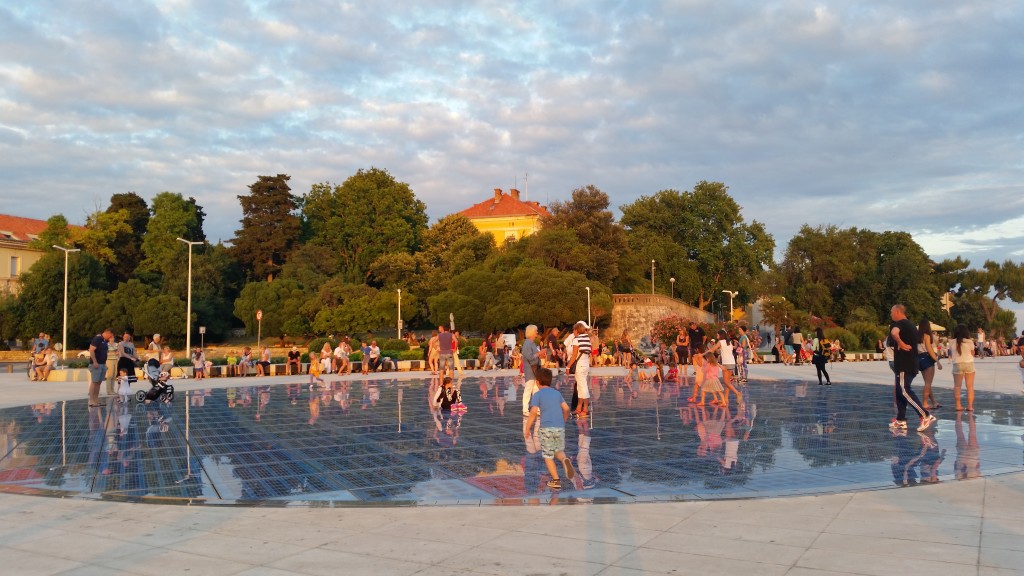 Greetings To The Sun

We started walking back towards the old town and as the kids weren’t yet tired (must have been the sugar rush from the ice-cream!) we decided to keep walking down the main street in Zadar until we reached the end of the old town.

A large crowd had gathered in front of a stage to watch the Ethnic Days festival, featuring performances from local folklore dance. Afterwards, some of the performers walked around the old town in groups, breaking out into song. We could hear them from our apartment- the sound was beautiful and gave the city a festive atmosphere. I felt like I truly was in Croatia, and was so grateful to be staying in the heart of the old town.

I had a feeling our family was going to love its time in Zadar.

Has your family been to Zadar, Croatia? Is there a particular city anywhere in the world that your family loves most?

This post is part 1 in a series of posts about our time in Zadar. To make sure you don’t miss the next post in this series, and to receive the monthly newsletter, subscribe HERE.