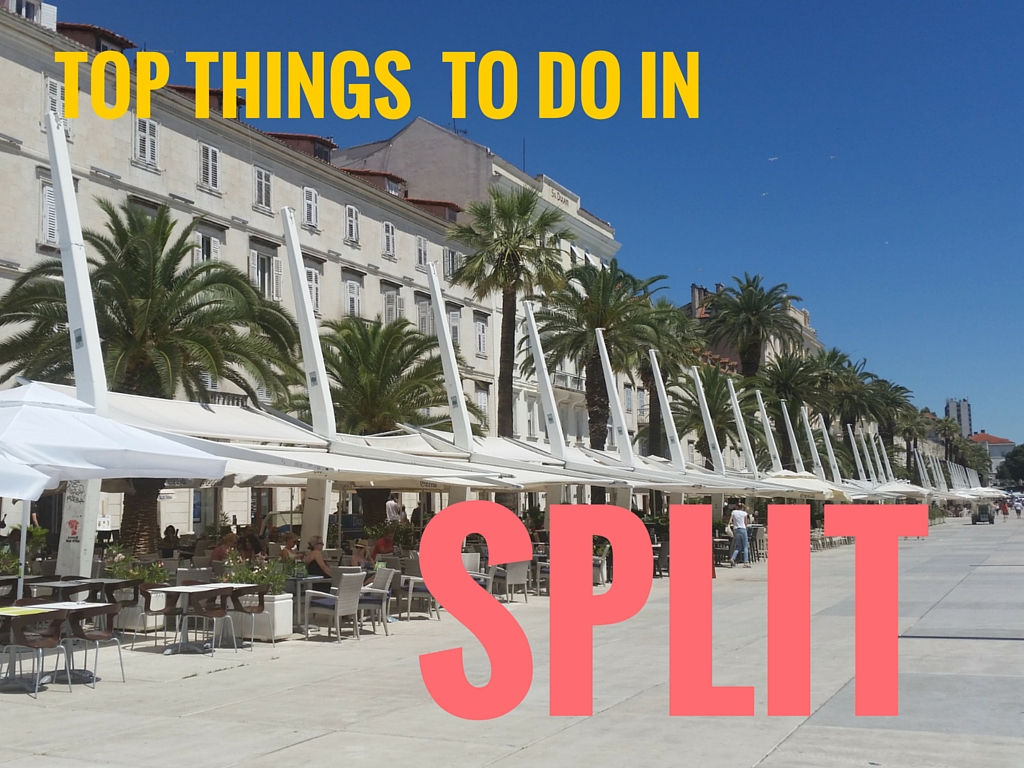 The port city of Split is the second largest city in Croatia and the largest city in the Dalmatia region. While many tourists use Split as the departure point for islands such as Brac and Hvar, it is fast becoming a very popular tourist destination in itself, with plenty of things to do in Split for families.

Top Things To Do In Split

Our family enjoyed Split while on our recent European trip, and in my opinion Split has a more Croatian feel than Dubrovnik. We spent 5 nights in Split and used it as our home base and did a couple of day trips to Brac. But you don’t need to spend as much time in Split- it is possible to explore the city in a day or two.

While most people love Dubrovnik for its historical centre and famous walls, Split has plenty of Roman history of its own that you can explore with your older children. Or you can wander around town and just enjoy the atmosphere and summer vibe of the city with an ice cream or other sweet treat.

Here I share with you top things to do in Split with your family. 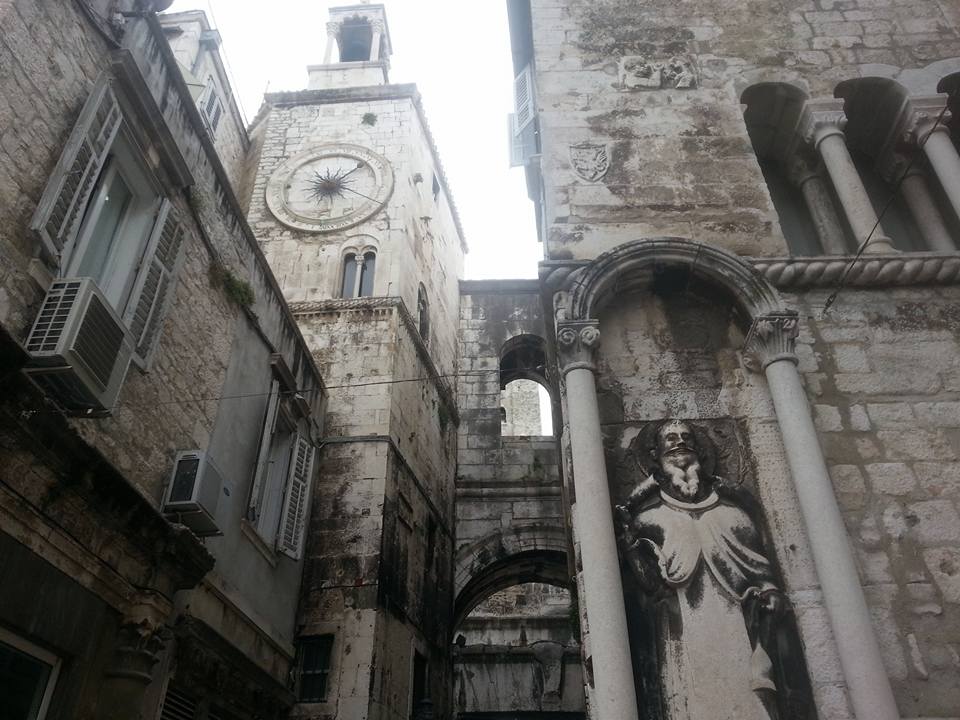 Diocletian was a Roman emperor who built a palace during the 4th century AD in preparation for his retirement. Although it is referred to as a palace, Diocletian’s Palace looks more like a fortress and after the Romans abandoned the region, it was used by local residents who needed protection from invading armies. Today, the remains of the UNESCO world heritage site is filled with many shops, restaurants and cafes. Take a stroll through the remains and stop at a local café for a meal or coffee.

Buy art and craft in the cellars of Diocletian’s Palace

The main section of the cellars beneath Diocletian’s Palace has many stalls that sell everything from tacky souvenirs to beautiful pieces of art and craft. Browse the many stalls and buy a souvenir of Split. My kids each purchased a miniature animal stone statue made by stone from the Croatian island of Brac.

Other parts of the cellars can also be visited however for a small entrance fee.

Regardless, the cellars of Diocletian’s Palace is a very cool place to hang out on a really hot day! During the summer, there is free acoustic entertainment outside the Luxor Hotel in Diocletian’s Palace every evening around 8pm. People sit on the steps around Peristyle Square, which is the central courtyard inside the palace, and enjoy the music and order a coffee or a glass of wine. And if you’re brave enough, you can get up and have a dance in the Peristyle Square!

There are also many buskers around town, so if you are out for an evening stroll, you’re sure to bump into performers dancing or playing music! 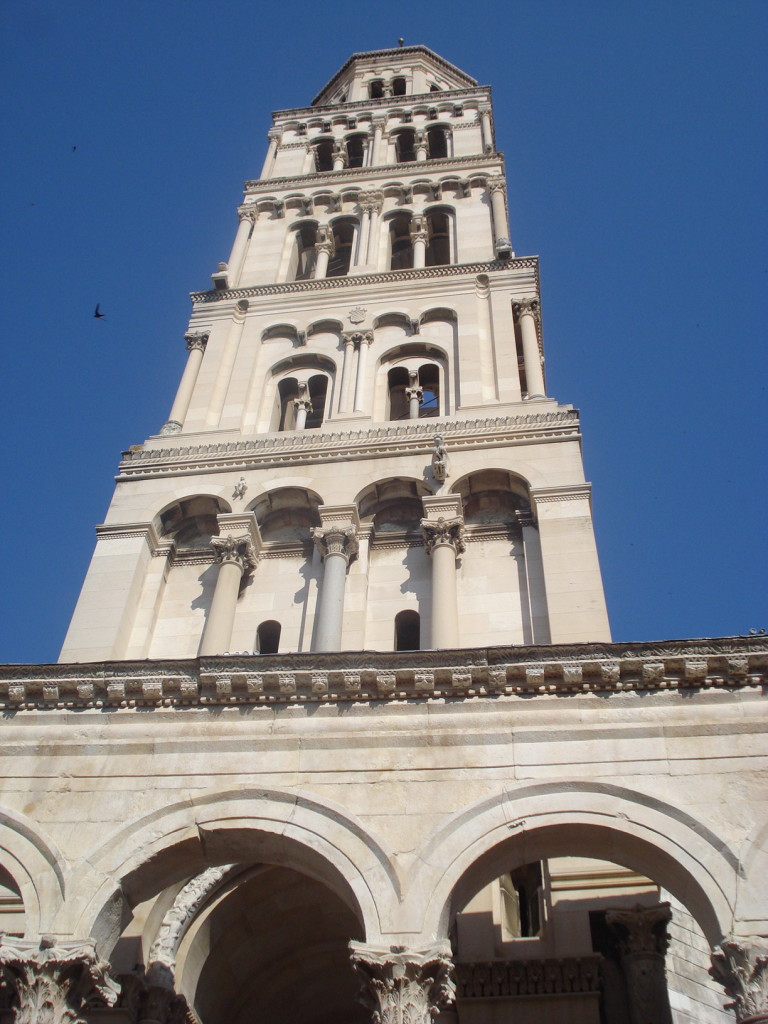 Maybe not for those who are faint hearted or suffer from vertigo, but the spectacular views from the top of the tower of the Cathedral of St Domnius are worth the climb up the steep stairs. 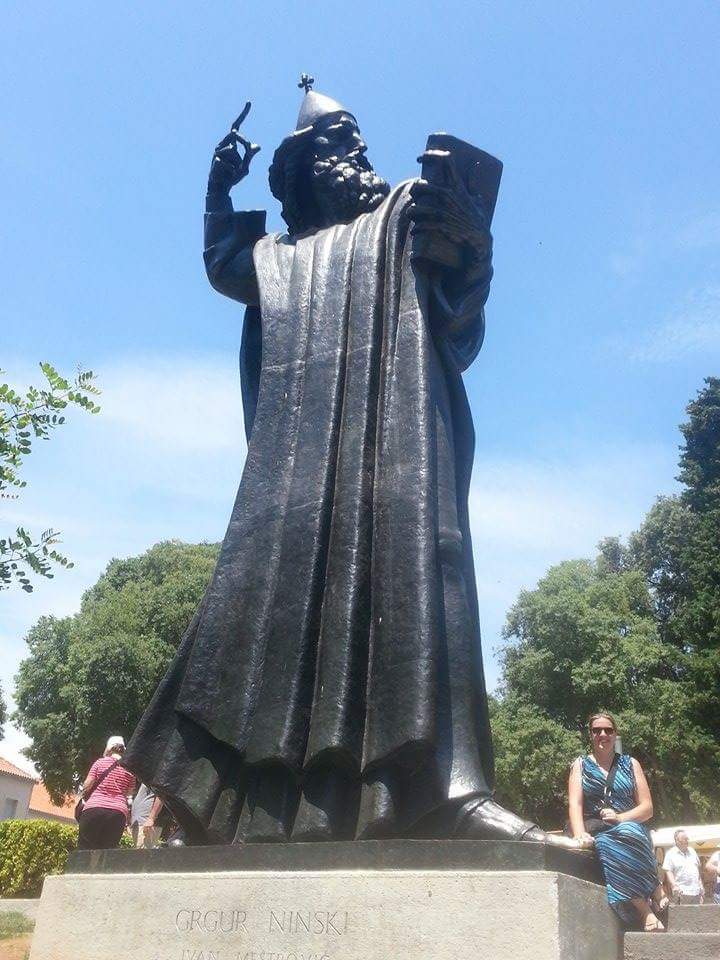 This isn’t just any old statue- Grgur Ninski’s statue (Gregory of Nin), outside the gates of Diocletian’s Palace, has a golden toe which if you rub, will bring you good luck. Gregory of Nin was a Croatian Bishop during medieval times, and he was a bit of a religious rebel who, at the time, opposed the Pope and the Catholic Church. He introduced the Croatian language into Church services- up until this point, Mass was spoken in Latin. 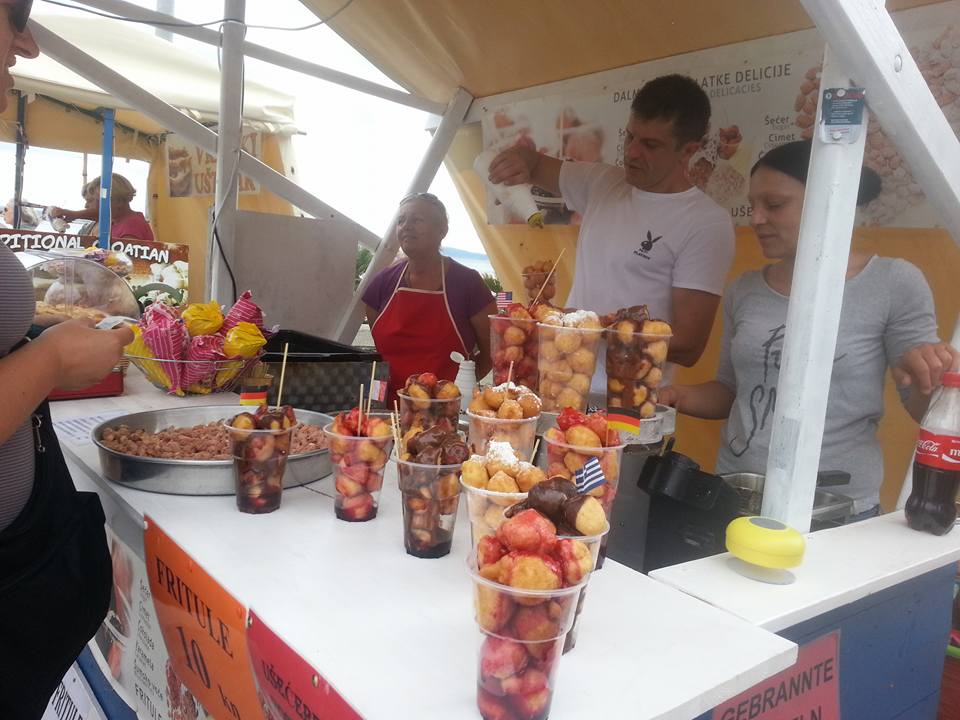 At the start of the Riva Promenade, near where the fishermen dock their boats every morning, there are stands selling freshly squeezed fruit juices and mini Croatian doughnuts known as “fritule”. You can buy a small or large cup full of fritule and choose your topping! My kids chose icing sugar. Want to learn more about Croatian cuisine? You might find THIS helpful. 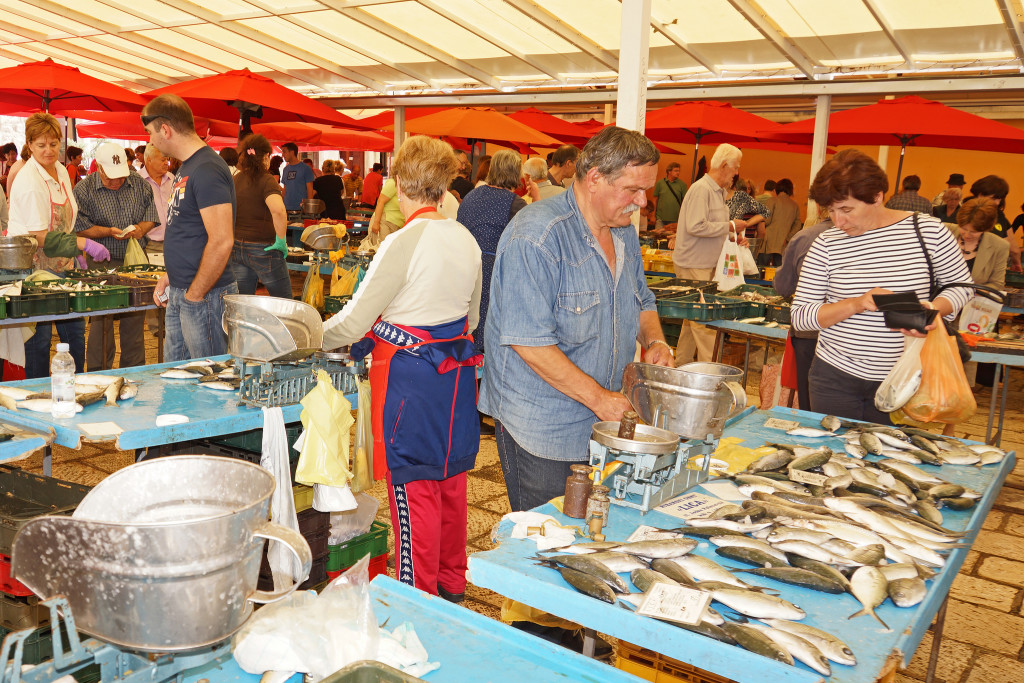 If you are staying in a self-catering apartment, then head out to the fish market (Ribarnica) in Split (just off the main street Marmontova Ulica that leads to the Riva promenade) to buy fresh seafood to cook your family for dinner. But make sure you get there super early as it gets very crowded. 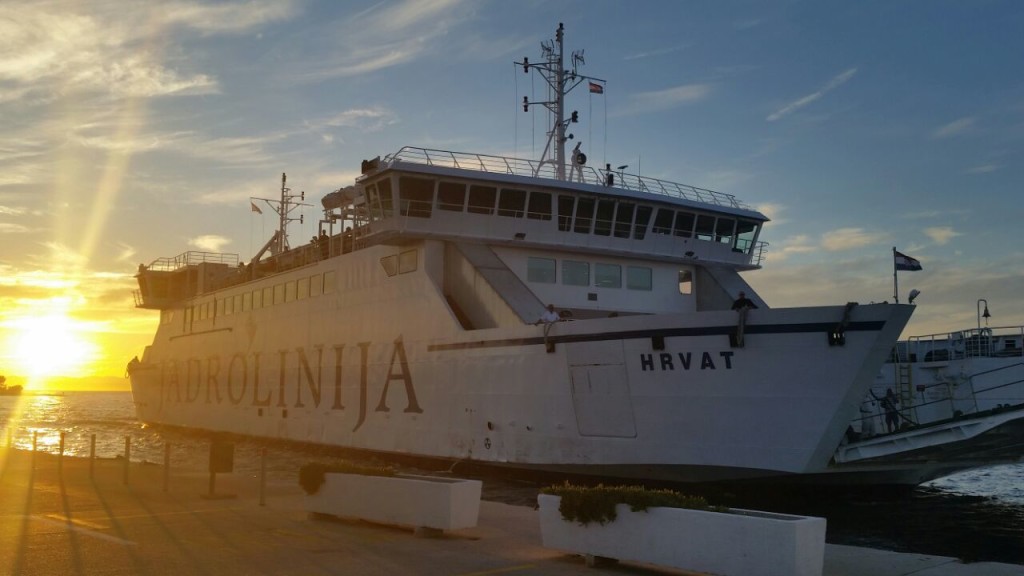 Split is an excellent city to base yourself in if you’d like to explore the nearby islands without staying overnight. The island of Brac is excellent to visit for day trips- ferries depart Split to Supetar on an hourly basis during the summertime. There are plenty of beaches and towns to explore on the island (which I cover in THIS POST). Our family did two separate day trips to Brac- one day we visited Supetar while we spent another day on the other side of the island at the famous Zlatni Rat beach in Bol.

Other Things To Do In Split:

Attend A Football Match
If you have a teenager who is a football fan, then take him/her to see Hajduk Split play at Poljud stadium.

Held from mid-July to mid-August each year, the Split Summer Festival is a popular outdoor festival held in venues around the city, including Diocletian’s Palace, featuring theatre, music and dance. 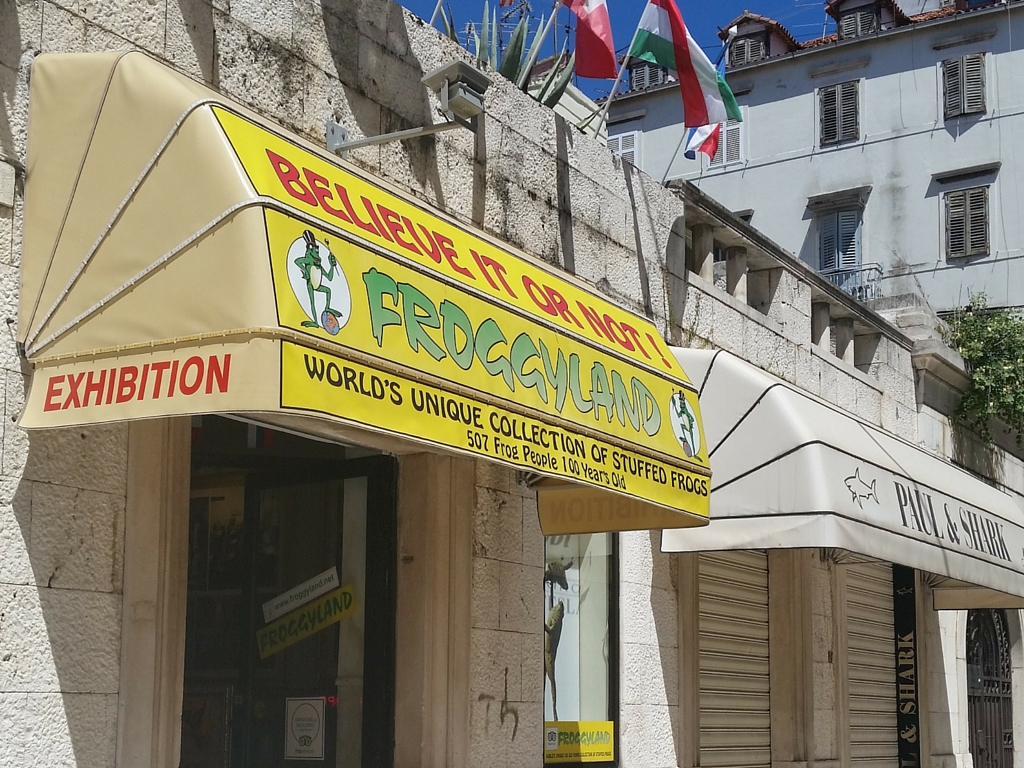 For something a little quirky, visit “Froggyland”- human scenes that have been recreated using over 500 stuffed frogs. Sounds a bit morbid and weird, but it is a very popular tourist attraction in Split and both kids and adults love it. 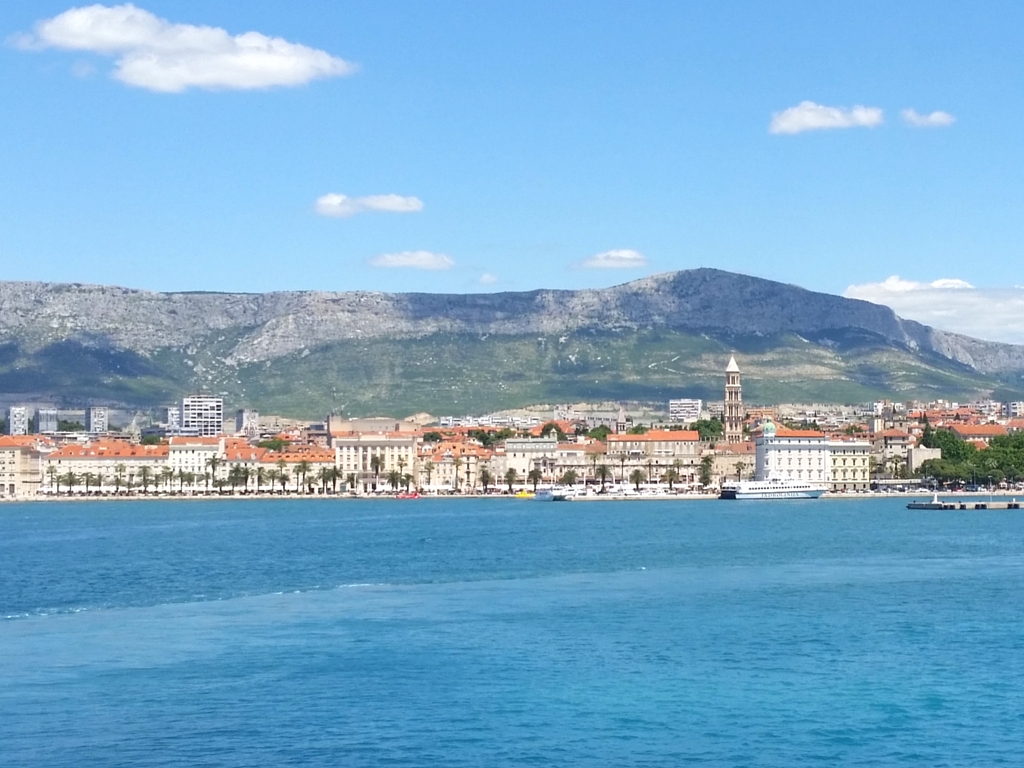 Ryanair has connections in the summer months between Zadar and Paris, Frankfurt, Manchester and Dublin. Split is a 2 hour bus or 1.5 hour drive from Zadar.

If you have a rental car, Split is a 4 hour drive from Croatia’s capital city Zagreb. If you leave Zagreb early in the morning, you can stop over and spend a few hours at the Plitvice Lakes National Park before resuming your journey to Split. You will have to pay road tolls while on this journey.

If you are driving from Dubrovnik, the scenic coastal journey will take you just under 3 hours. You will pass a section of road that is actually part of Bosnia-Hercegovina, and your passports may/may not be checked.

There’s more to Split than just being a stopover destination for island hoppers- it may not be as famous as Dubrovnik, but Split packs just as much historical punch as its Dalmatian cousin!

Make sure to stay up to date with all my posts by subscribing HERE. All subscribers will receive a copy of my helpful new e-book “Pre-departure Guide For Families: 51 Tips To Make Your Trip Run Smoothly”.

Have you been to Split with your family? Do you prefer Split or Dubrovnik?

18 thoughts on “Top Things To Do In Split For Families”